Best known for: “The Adventures of Robin Hood,” “Gone With the Wind,” and two Oscar-winning performances, “To Each His Own” and “The Heiress”

First claim to fame: Gossip magazines offered endless coverage of her feud with sister Joan Fontaine, which lasted for decades.

Second (and more important) claim to fame: She helped end the old studio system. While under a seven-year contract with Warner Bros., she refused several roles and was suspended multiple times. When her contract ended, WB said she still owed them six months, for the time off during suspension. She made the unprecedented move of suing the studio and the judge agreed with her, saying the system was one of “peonage.” On March 15, 1944, Variety ran the headline “De Havilland Free Agent.” Her career flourished after that, and actors were no longer beholden to studios, which empowered them and their agents in all future negotiations.

Third claim to fame: She’s 104! One of the last remaining stars of Old Hollywood. Even better, she was recently photographed riding a bicycle. They don’t make ‘em like her anymore.

Autobiography: “Every Frenchman Has One” (1962, and still in print)

Deeper Dive: There are few veterans of Hollywood’s Golden Age who are still around, much less still making headlines. But Olivia de Havilland, who turns 104 Wednesday, was always a rule-breaker.

She’s part of the current furor over “Gone With the Wind,” since she is the only surviving star of the 1939 epic. In 2017, she also sued FX Networks over her depiction in the miniseries “Feud: Bette and Joan,” from exec producer Ryan Murphy. After a series of appeals, the court ultimately decided against de Havilland. The ruling represents a rare defeat for her, but serves as a reminder that the actress is not going to take any nonsense from anyone. 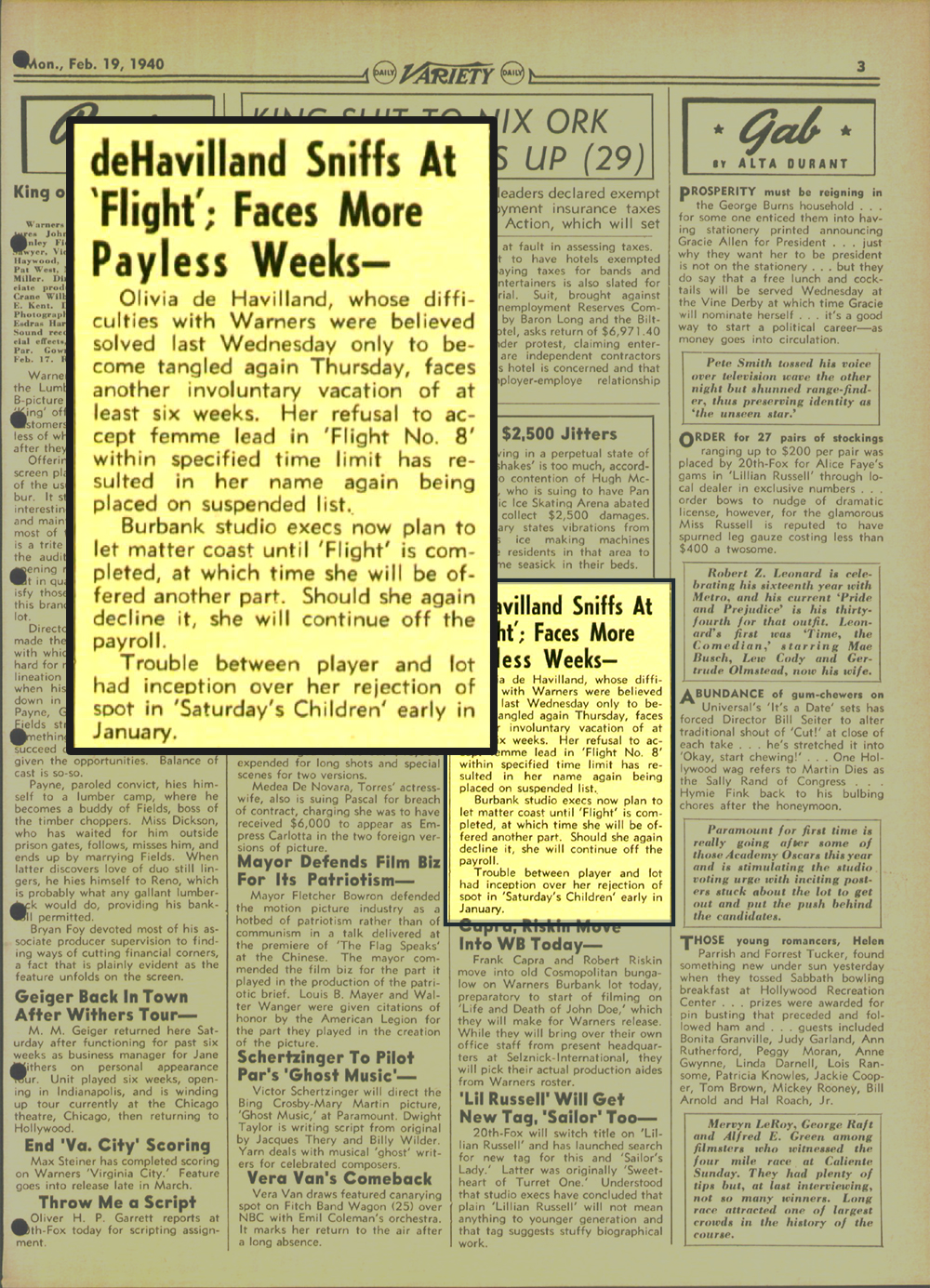 At 19, de Havilland made her film debut in the 1935 “A Midsummer Night’s Dream”; WB signed her to a seven-year contract, which was standard for actors.

WB put her in such films as “Captain Blood” and “The Adventures of Robin Hood,” both with Errol Flynn. But she wasn’t always happy with the studio’s assignments and WB suspended her multiple times.

When de Havilland’s contract expired, Warner Bros. claimed it was owed an additional six months of work, for the time off during suspension. She countered that the contract was for seven years, not for the time actually spent working. Superior Court Judge Charles S. Burnell agreed with her, saying otherwise the contract was a form of “peonage.”

On March 15, 1944,Variety ran the headline “De Havilland Free Agent.” That set in motion the system that remains today, when actors, agents and guilds could call the shots when making a deal. 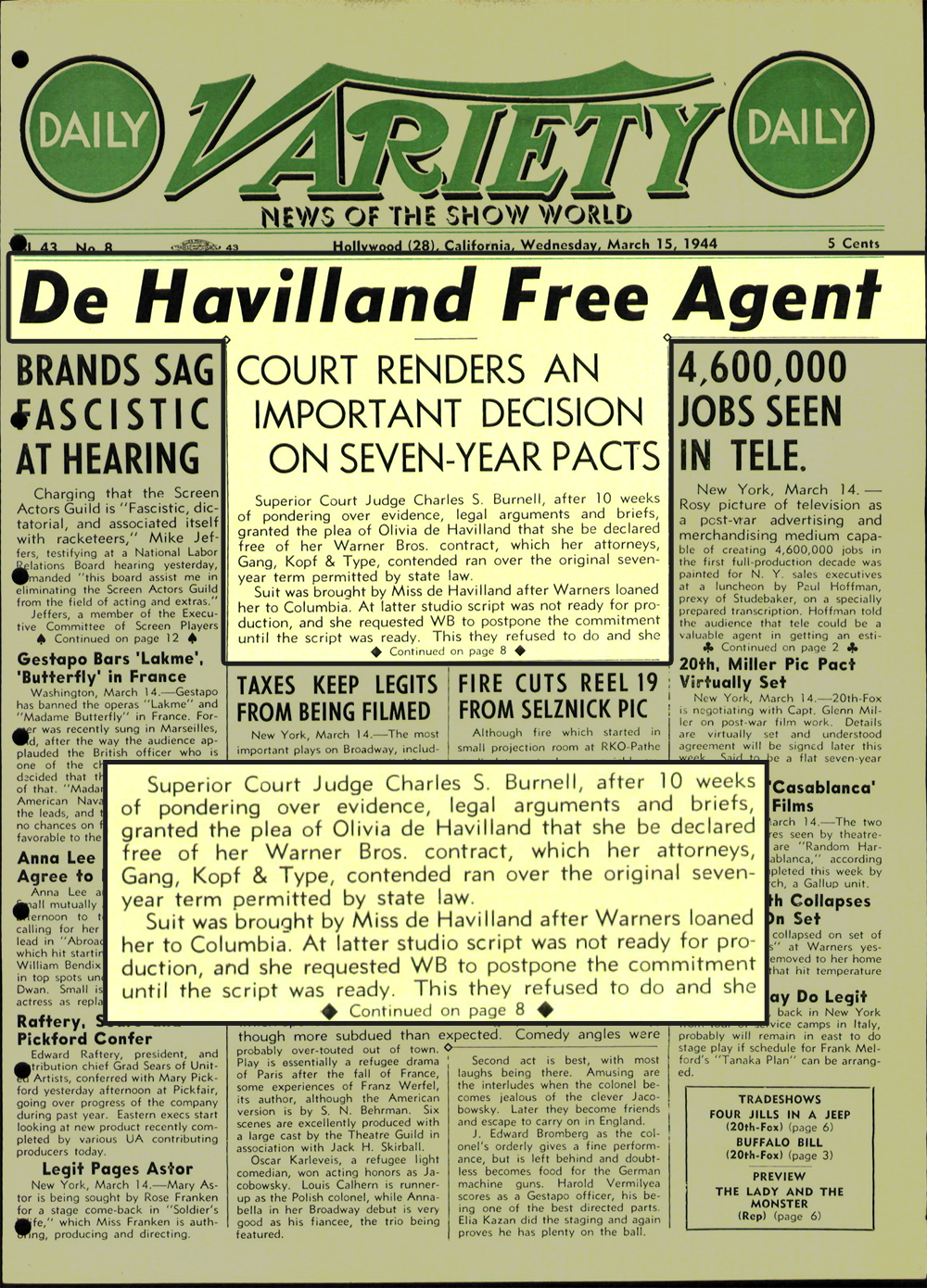 Four months later, de Havilland went to court again, seeking assurance that she could work elsewhere without interference from Warners. Again, she was successful.

Her suits seemed risky, but de Havilland’s career thrived. Shortly after her legal victory, she won Oscars for 1946’s “To Each His Own” (1946) and “The Heiress” (1949); in all, she had five Oscar nominations. She continued to work in films like “The Snake Pit,” “My Cousin Rachel,” “Light in the Piazza” and “Hush … Hush Sweet Charlotte,” among many others. She segued into TV work, with her final onscreen appearance in the TV movie “The Woman He Loved” (1988).

In 1965, she became the first woman to serve as president of the jury at the Cannes Film Festival. Three years ago, she recalled to Variety that at first she was intimidated, but “As the only female on the jury that year, I did enjoy presiding over a committee entirely composed of men.” 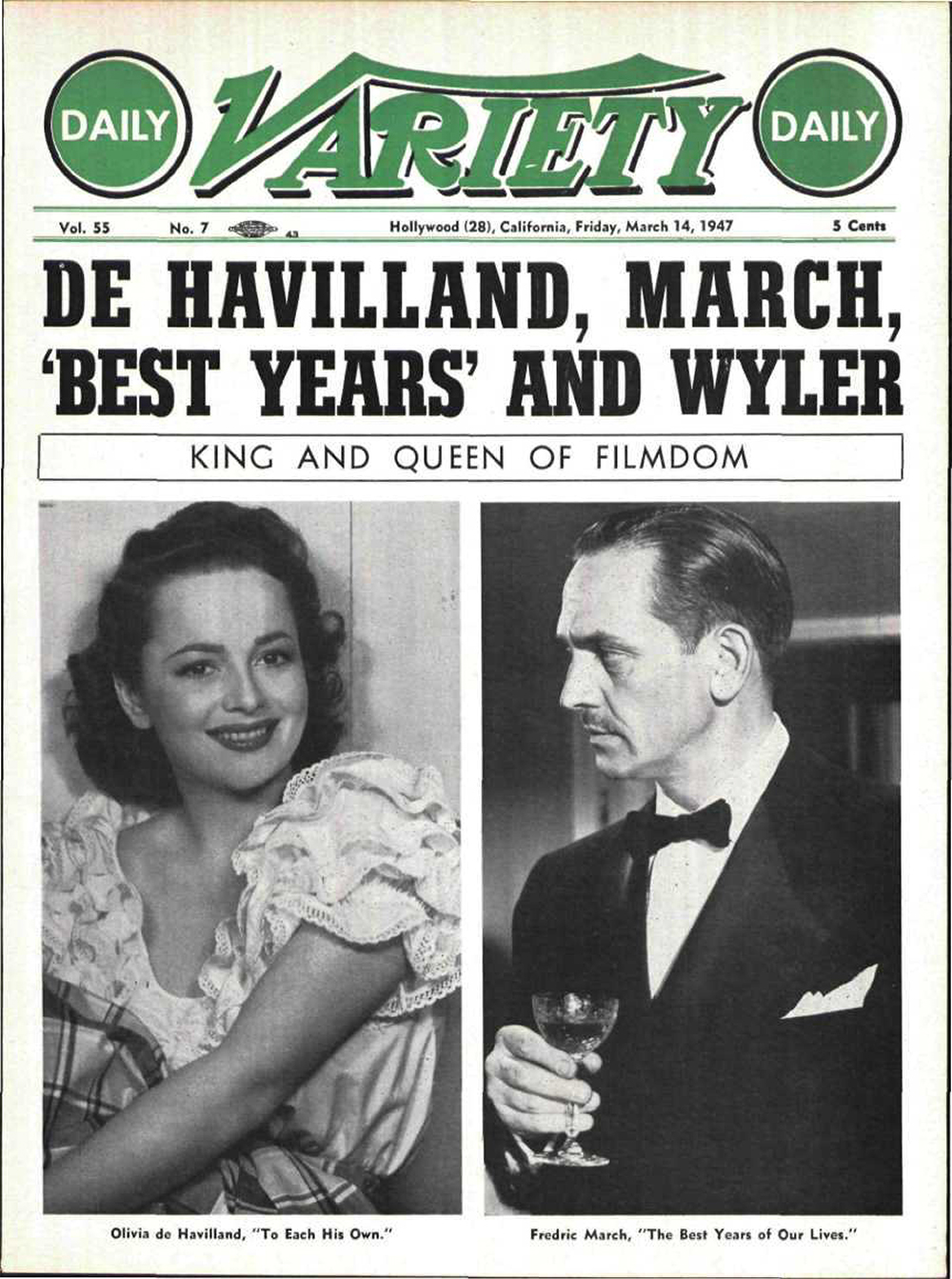 In November 2008, President George W. Bush presented de Havilland, then 92, with the National Medal of Arts, saying “Her independence, integrity and grace won creative freedom for herself and her fellow film actors.” Two years later, she was appointed a Chevalier (knight) of the Legion d’Honneur. In June 2017, she became the oldest woman ever to receive the British title of dame, an honor bestowed on her by Queen Elizabeth II.

The actress has lived in Paris for 60 years. She still makes rare public appearances when she chooses, such as her trip to Los Angeles for a 2006 celebration of her 90th birthday thrown by the Academy of Motion Picture Arts & Sciences and occasional interviews centered on her 100th birthday.

Last year, for her 103rd, a photo of her riding a bicycle was posted to Facebook. Once again, Olivia de Havilland was defying expectations and challenging preconceptions.