According to a report released by Iranian Pakshoo Industrial Group, the company’s advertising video won two silver and Bronze statues in the Public Relations and Screenplay sections among 70 advertising videos from 50 different countries.

Some of the opponents of the Iranian company’s image film in the Public Relations Section were companies such as British Petroleum, Bridgestone, Bentley Motors, and the English Football League.

New York Festivals World’s Best TV & Films competition honors programming in all lengths and forms from over 50 countries. the NYF Television & Film Awards are judged by award winning Directors, Producers, Writers, Actors and various other creative media professionals from across the globe. All entries are judged on-line by panels of award-winning, according to the website of the event. 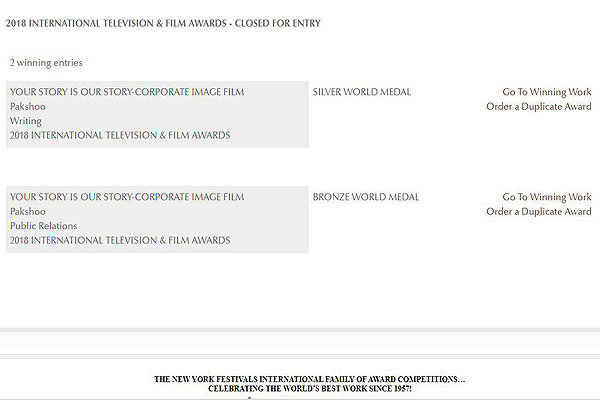 Pakshoo’ video is available at the following address: