Franco Nero: The Golden Age is over

Art and Experience: The legendary Italian actor Franco Nero says the golden age of the Italian cinema “will never return” and blames it on television and the damage it has done to people’s film-watching habits.

For many Iranians, he is better known as the title character in Django (1966), an Italian Spaghetti Western film directed and co-written by Sergio Corbucci, in which Franco Nero plays his breakthrough role as a drifter riding into the middle of a border fray between Mexican bandits and the Ku Klux Klan.

“I belong to Sean Connery’s James Bond era. He went on to act in many other films, but for many, he was still known as James Bond. The same thing happened to me. I’ve played in many movies but it is Django, made on almost no budget, that still holds a special place over the others,” he tells an enthusiastic gathering of the press and fans at a Q&A panel as part of the FIFF36 programs on Friday.

He talks of Tarantino’s Django Unchained (2012) in which African Americans replace the Mexicans as the downtrodden and Nero had a cameo appearance, and goes on to promise with 90% certainty that a new movie in the franchise, named ‘Django Lives!’, will be soon made in the future, with a screenplay by John Sayles and Nero himself reprising the role.

“I am an actor, director, producer, and a lucky man,” this is how Nero introduces himself. He puts great emphasis on ‘luck’ as a key factor in his international exposure which, to this day, has landed him as many as 220 roles all across the world. “If I ever win an Oscar, I will dedicate it to all the great actors and actresses in the world who were not just as lucky,” he says. “I believe in destiny. There’s an African proverb that says, you can wake up early in the morning, but your destiny has woken up 30 minutes before you.”

“I’ve never been to Tehran,” he says. “I’ve travelled to over 100 countries across the world, including Sweden, Germany, Russia, Czech Republic, Hungary, Britain, Canada and the US, but Iran was absent on the list. So the Fajr festival was a good opportunity to finally come here.”

He admits he isn’t much familiar with the Iranian cinema. But he mentions that he is friends with Vittorio Storaro, the Italian cinematographer and three-time Oscar-winner for masterpieces such as Bernardo Bertolucci’s ‘Last Tango in Paris’ and Francis Ford Coppola’s ‘Apocalypse Now’, who worked as a cinematographer on Majid Majidi’s biopic ‘Muhammad, Messenger of God’ in 2015. “It was a great film, and Storaro was very pleased with the project.” He says he has also seen works by Abbas Kiarostami and Asghar Farhadi, the two major Iranian filmmakers that have made a noticeable impact on the world’s cinema scene.

Asked to comment on his experiences in filming in different cinema industries he said, “The spaghetti that we make in Italy is totally different from the ones made around the world,” he says. “The same is true about the cinema in each country.”

Here, he shows off his acting skills and charismatic power of storytelling as he keeps the audience, who don’t even know Italian and have to wait for the Persian translations, captivated by anecdotes. “A few years back, I was on Johnny Carson’s show, and he asked me about the difference between working in Italy and working in the US. I said that in the US, there are six big film studios, such as Warner Bros., Paramount Pictures, Walt Disney Studios, 20th Century Fox; and they decide to make a movie. The first thing they look for is the most popular star in Hollywood at the time. Then they look for a best-seller to adapt into a screenplay or sometimes they go for an original script. In 90% of cases, the director is chosen by the studio, and if the director comes into conflict with the cast, it is the director who gets kicked off the production. And the whole team sticks to a strict, meticulous schedule that even includes the weather forecast. It is a real industry.

“But in Italy, it’s a different story. First, there is a director who wants to make a film. He goes to a producer and the producer says let’s hear what you’ve got. The director then turns into an actor as he plays out the script in order to move the producer so he would fund his film. Then they look for an actor. They think of Franco Nero but dismiss him as being too expensive. The director has to round up his own team and they work on their own sweet, leisure time.

“I told Johnny Carson that in Italy, all directors have low blood pressure. It’s very difficult for them to start work early in the morning, so they get to the location rather late,” he finishes his tale with a friendly jibe at the notorious Italian tardiness. Well, that part of the story we could totally relate. Iranians are guilty of the same crime, after all. 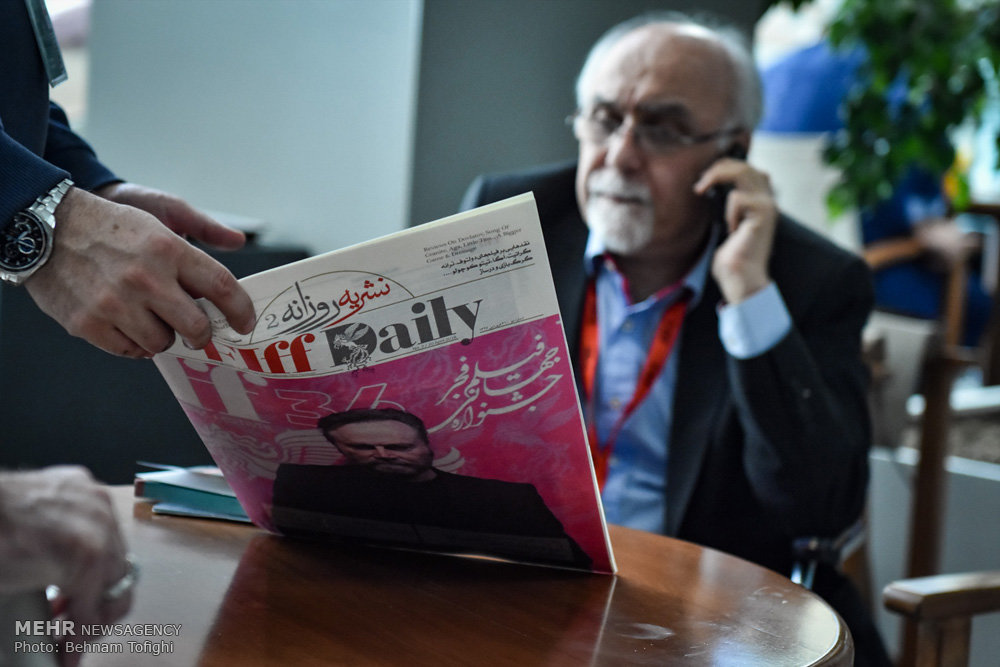 He says Spencer Tracy was his role model in acting when he was younger. “But a couple of years later, I had the chance to work with one of the greatest stars in the world, Laurence Olivier. One day he told me that I reminded him of his younger self. You have the physique for always playing the hero, he told me, the way Americans do. Americans always want to be the hero of a story where the Europeans are the losers. But you have to play in one film in a year and make sure that the movie is really going to sell. But that’s monotonous, Franco. So be an actor. Take risks. This way, your path will go through ups and downs, but in the long-run, you will reap the benefits of your hard work. And I took his advice.”

“I think I am the only actor in the world, and I say this with much pride, to have taken on personages from 30 different nations. Obviously, it has been a great risk, but a pleasant one nonetheless,” he adds.

The Italian cinema is best known for its ‘Golden Age’ of the 1940s, the post-war neorealism characterized by stories about the poor and the working class, usually casting non-professional actors to deal with themes of everyday life and difficult economic conditions, in clear opposition to the Hollywood-influenced productions of the Fascist years. Rossellini, Luchino Visconti, Giuseppe De Santis, Vittorio De Sica and Carlo Lizzani are notable figures of this era who filmed on location to reflect the ‘real Italy’ on the screen. The movement died out in Italy by mid-1950s, but it went on to influence cinematic trends around the world. You can perhaps even see the impacts of that Italian brand of neorealism in Asghar Farhadi’s works, where you barely register that you are watching a film and not, in fact, looking through a window at someone’s actual life.

I ask Franco Nero if he believes that the golden era of Italian cinema is well over and done with, or if another revival is on the horizon, which can leave as great an impact on the global cinematic trends as the Italian neorealism once did.

He answers with a resonating, ‘No.’

“The 50s, 60s and 70s were the shining periods of Italian cinema. Many great American filmmakers said that they have been influenced by that era. That age will never return.”

Why, though? “Because now there is television.”

He seems to hold a particular distaste for television and the change it has made on people’s film-watching habits.

“You can no longer make a film without first obtaining broadcasting rights from the television. In the past, there was a producer, but now there are a handful of employees on various TV networks who read the script and have the final say on it. They’d say, ‘ahh this scene can’t be shown on TV at 8:30 PM, so we have it to cut it out.’ So the filmmaker is castrated and can’t create the content he wants.”

“Unfortunately, television ruined cinema. And I’m going to tell you why: When you go to the cinema, you have made a conscious choice to watch a movie. You pay for the ticket, watch the movie in silence and in the dark, and decide at the end if you liked it or not. On TV, during the primetime between 8:30 to 10 PM, this is how a movie is watched: while on the phone, eating dinner, burping and farting, and all the while the movie is rolling. They pay no respect for the efforts put into the film. One of my dearest friends Fernando Rey, who was a great Spanish actor, told me once that his Don Quixote had 15 million viewers. I told him, no way. Perhaps 200,000 at most, who had really watched the series with full attention. The rest just watched bits and pieces. I ran the same test in Italy. Someone said, ‘hey Franco, I saw you on TV last night.’ I said, oh really? What was the story about? He said he just watched a part of it when he was having dinner.”

“The only benefit that the TV can have is that if you missed the chance to watch a film in the cinema, you can watch it a few months later on television. Unfortunately, the good movies are only shown on TV very late at night,” he laments.