Arguably the highlight of the Ji.hlava International Documentary Film Festival – certainly among the industry folk – is the Emerging Producers presentations, a glimpse of things to come as bizzers new to the nonfiction film field present their work and upcoming projects.

Selected for their initiative and dedication, then coached by more experienced leaders in the European doc world – often former Emerging Producers themselves – members of the group generally go on to successes in the genre at impressively high rates.

Held this year at Ji.hlava’s new Industry Hub venue, the event saw 18 producers on the rise introduced by fest head of industry Jarmila Outratova and Radim Prochazka, board member of the Czech Audiovisual Producers Assn., himself a former Emerging Producer, class of 2007.

First to present his work was Audun Amundsen of Norway, who said, “I started my career by following a family deep in the jungle of Indonesia for 15 years. It became the documentary ‘Newtopia,’ ” later sold to ARTE.

A character in the doc then shared a vision with Amundsen that he would return and be a major figure in Indonesia, a prophecy that became true, he said, and became “Help, I’ve Gone Viral!,” later premiered at HotDocs.

Like others in his class, Amundsen said for him his work is all about “personal and immersive documentaries.”

Emerging Producers “is an inherently holistic industry program,” says Irena Taskovski, head of studies for the organization, “that not only includes practical know-how, but also fosters human and professional connections between participants and conveys the importance of self-care and mental health in the film industry.”

In the aftermath of the pandemic, she adds, “this program is more important than ever.” Amid isolation, with no cinema, fests, or space to connect with business partners, she says, “we have all realized how much we need each other for successful collaboration in European cinema and how our wellbeing is key to success.”

Amundsen, also an online strategy consultant at Gonzodocs.com, focuses on “performative and participatory documentaries” and has won governmental and non­governmental grants for his “Newtopia,” “Help, I’ve Gone Viral!” and “Click the Link Below.”

This latest project, in development and planned for release in 2023–2024, delves into the murky world of money­making gurus online and those who risk their life savings for a “guaranteed tenfold profit.”

He produced “Kapp to Cape,” directed by Arash Ashtiani, and the 2015 Italy-U.K. project “Cicliste per Caso – Grizzly Tour,” directed by Silvia Gottardi, in 2020, and “Big North,” directed by Dario Acocella, this year.

Hungarian Borbala Csukas, who studying sociology at Corvinus University of Budapest, has divided her work between the family­-run production company Makabor Studio and other independent production companies such as ELF Pictures and Proton Cinema. She is producing three feature docs, “Conquering Time” by Kata Olah and Noemy Schory, “Lost Fiancé” by Olah and Csukas, and “Narrow Path to Happiness,” by Olah.

Since 2019, Csukas has been the industry coordinator at the Verzio International Human Rights Documentary Film Festival and past work includes “Hi Papa,” directed by Zsuzsi Konrád, “Youniverzum,” by Angyalosy Eszter, Barathy Gyorgy, Olah, Sandor Csukas, Dorka Gryllus and Simon Kornel, “Divas,” by Mate Korosi, “Mignon,” by Olah and Sandor Csukas, and “My Digital Nomad,” by Olah. 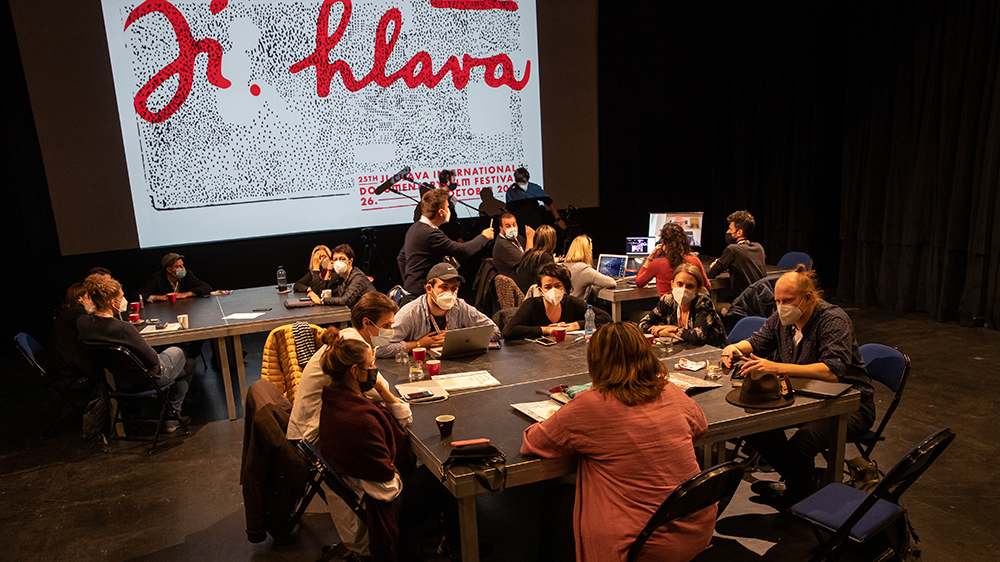 French producer Victor Ede, who says he “faked studies to avoid serving in the army,” published art books and has done assorted documentary jobs including editing, running the Cinéphage since 2014, dedicated mainly to non­fiction and co­productions.His work includes “Boy Saloum,” directed by Audrey Gallet, “Congo Paradiso,” directed by Benjamin Géminel and Tristan Thil, “The Red Zone,” directed by Thil and “The Order of Things,” directed by Ramona Badescu and Jeff Silva, a France-U.S. production.

Projects in Development include “Horia” by Ana­Maria Comanescu, “In the Name of the Mother and of the Father,” by Tudor Platon and “Whose Dog Am I?” by Robert Lakatos.

Belgium’s Kristian Van der Heyden has worked as a freelance producer who, through his NGO, PORT ACTIF, has helped exhibit video artists from Flanders at venues from Berlin to Hong Kong and beyond.

His films include “A Punk Daydream” by Jimmy Hendrickx and upcoming work includes “Slave Island” by Jeremy Kewuan and Hendrickx.

Evan Horan of  Ireland is a producer at film and TV company Blinder Films, based in Dublin, Ireland, who has worked on “Grace Jones: Bloodlight and Bami,” “Extra Ordinary” and “A Mother Brings Her Son to Be Shot.” He has produced “A Dog Called Money” by Seamus Murphy and “Come to Daddy” by Ant Timpson and upcoming work includes “Searching for Space,” by Cara Holmes and “Breed” Kate Dolan.

Czech Jan Hubacek has worked on video games including “Mafia 3” and has produced docs “Accept,” “Foreigners,” which he directed, and “Tonight the World” by Daria Martin. Upcoming work includes “Who Owns the City” by Petr Kacirek and “Amateurs of Kingsfield” by Robin Vrba.

Jin Jeon of South Korea has produced “Becoming Who I Was” by Changyong Moon and Jeon, and “High Idea” by Daehee Yoon Jeon with upcoming work including “Banking on Eggs” by Jeon, a look at women freezing their eggs to delay childbirth amid a national population crash.

Karsten Krause of Germany has produced and directed “You and Me” and “Der Heinz, der gräbt ein Loch in ein Stück Land” and upcoming work includes “Immersive Dark Tourism” by Andre Siegers and “Der Optimismus” by Steffen Goldkamp.

Natalia Libet of Ukraine has produced “Anna” by Dekel Berenson and “Stop-Zemlia, by Kateryna Gornostai with upcoming work including “Ashes Setting in Layers on the Surface” by Zoya Laktionova and “Dawn Choir” by Mykola Zaseev.

Melissa Lindgren of Sweden has produced “Always Amber” by Lia Hietala and Hannah Reinikainen, and “Idomeni” by David Aronowitsch with upcoming work including “The Society of the Spectacle” by Goran Hugo Olsson and Roxy Farhat and “Our Love” by Hietala and Reinikainen.

Silvia Panakova of Slovakia has produced “Fair Play” by Andrea Sedlackova and “Jan Palach” by Robert Sedlacek, with upcoming work including “The Boundaries of Fidelity” by Diana Fabianova and “Alone Among Strangers” by Stanislav Parnicky.

Karolina Smigiel of Poland has produced “The Dragon Spring” by Jarosław Wszedybyl and “The End of the Valley of Tears” by Wszedybyl with upcoming work including “Playing with Time. Returns” and “Nanga Dream,” both by Wszedybyl.

Franziska Sonder of Switzerland has produced “The License” by Nora Fingscheidt and “Loving Highsmith” by Eva Vitija with upcoming work including “Brave New Switzerland” by Benny Jaberg and Maurizius Staerkle Drux and “Becoming Astronaut” by Roman Hodel.