Notice: Function add_theme_support( 'html5' ) was called incorrectly. You need to pass an array of types. Please see Debugging in WordPress for more information. (This message was added in version 3.6.1.) in /home/aecinemaorg/public_html/wp-includes/functions.php on line 5831
 Critics’ Festival Tales: Cannes Returns and Drinks With Russell Crowe | Art and Experience Cinema

Though critics analyze and express opinions on stories, they are also storytellers themselves. And film festivals are full of stories — both on and off screen. As 2021 saw the world begin to return to in-person film festivals, we asked our chief film critics about some of their festival memories, past and present. Owen Gleiberman recalled a chance encounter from two decades ago at the Sundance Film Festival, while Peter Debruge detailed his experience at 2021’s Cannes.

Cannes Brought Rewards — and Risks — Aplenty
If the first year of the pandemic taught us not to take anything for granted, 2021 was all about getting back in the saddle. I swore I’d attend Cannes if I could, and sure enough, I was there in person last July, freshly vaxxed and desperate enough for a return to normal that I went along with protocols that were anything but.

As you probably recall, Cannes 2020 was canceled on account of the coronavirus. Festival topper Thierry Frémaux had hosted his own gathering, the classic-focused Lumière Festival, a few months later in Lyon. He refused to miss another Cannes, treating the 2021 event as the Champagne cork that would mark the start of a fresh festival season.

And so it was, in a sense. Cannes typically gets first dibs at leading filmmakers’ new work, and quite a few directors had waited an entire year to premiere their latest in the Palais, hoping for a shot at the Palme d’Or. Wes Anderson. Leos Carax. Paul Verhoeven. The great Japanese director Ryûsuke Hamaguchi had two films in 2021: His three-part “Wheel of Fortune and Fantasy” premiered at Berlin, while three-hour “Drive My Car” held for Cannes.

For two weeks, I wrote my brains out, trying to cover as much as I could for Variety, but still I made time to see every film in competition — even though the safety measures didn’t make much sense. Europe was organized enough that pretty much every vaccinated person had a QR code to demonstrate as much, whereas we Americans showed up with a flimsy piece of paper, obliging us to take a saliva test every 48 hours to prove we were COVID-free. Fine, no big deal. I was happy to be there, and spitting in a tube every two days was a small price to pay to avoid an outbreak.

In retrospect, I don’t know how we avoided a super-spreader event. On opening night, Frémaux circulated through a full-capacity room without his mask, shaking hands and kissing cheeks as if the virus were behind us. (As I write this, France is facing more than 100,000 new cases a day, and Sundance just pivoted to an online festival.)

Those rapid tests? They were required to access the professional side of the Palais, where people kept a reasonable distance, whereas the festival still packed its largest auditorium with whoever flashed a ticket (and the correct footwear, of course), since France had stricter rules on public spaces than on cinemas.

The world needs film festivals. They’re vital to the survival of this medium. But we also need a responsible system for ensuring some degree of safety to those who attend. Essential as the event itself is, Cannes’ approach felt reckless to me. Six weeks later, Telluride was smart about treating the entire event as a bubble. And Venice stuck to its reduced-capacity approach from 2020. Let’s hope Cannes comes up with something a bit more responsible for 2022.
— Peter Debruge 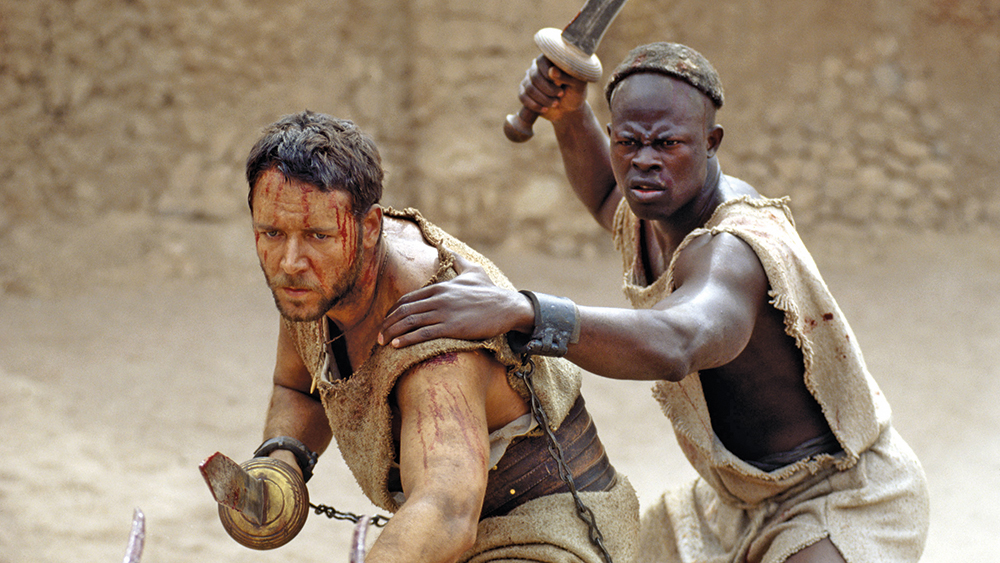 A Toast to Russell Crowe
20 years ago, at the 2002 Sundance Film Festival, I got to spend an evening hanging out with Russell Crowe. It was nothing I had planned or anticipated, and I doubt it would have happened at all had Crowe been there promoting some major indie movie. In fact, he was there to present “Texas,” a scrappy little documentary about his rock ’n’ roll band, Thirty Odd Foot of Grunts, that Variety called “a not especially interesting look at a workmanlike band that would probably never have gotten past the Aussie club circuit if not for a quirk of celebrity fate.” The movie wasn’t going anywhere; even within the Sundance buzz machine, there was scarcely anything about it to promote. Which may be why Crowe, after the premiere, was just standing outside the theater at loose ends. Figuring I had nothing to lose, I went up to him and initiated a friendly chat, and after a few minutes I asked him, quite spontaneously, if he wanted to grab a drink. To my surprise, he said yes.

We headed to Main Street and wound up at a music bar where Russell Hitchcock, the lead singer of Air Supply (and Crowe’s fellow Aussie), was going to be performing later in the evening. That turned out to be not as friendly a connection as you might imagine.

Critics like to pretend they aren’t starstruck, but I confess that I’ve always been as starstruck as they come. In New York City, where I live, whenever I spot a celebrity I’m like a little kid seeing Santa Claus. At the time of my Crowe encounter, I was in awe of him, because I thought his performance in “Gladiator” — which had come out two years before — was one of the greatest pieces of star acting I’d seen in the post-studio-system era. I still think it is; Crowe, in Ridley Scott’s film, had the kind of macho majesty we associate with larger-than-life actors like Kirk Douglas. The way that Crowe lowered his eyes at Joaquin Phoenix to deliver a line like, “The time for honoring yourself will soon be at an end” (translation: I would like to remove your eyeballs with my thumbs) was, to me, sheer badass movie-star poetry. Given that Crowe, off-screen, had a famously short fuse that had already begun to attract the attention of the tabloid press, I felt, on some childlike level, that I was about to have a drink with the most dangerous man in Hollywood.

In fact, Crowe was a gentleman. He was courtly, he was friendly as could be, and just after we sat down and ordered beers, he did something that I don’t think an American actor would have done — he reached across the table to remove a piece of lint from my sweater, in a this-is-what-mates-do-for-each-other sort of way. It was kind of touching. We talked about the stuff you’d expect: “Gladiator” and “L.A. Confidential,” his method as an actor, his life in the celebrity fishbowl. I saw right away that he was an Aussie to the core, right down to his slightly corny sense of humor. But that Down Under vibe also extended to a certain take-no-guff attitude, which I got to see on full display.

By the time Hitchcock took the stage for his solo set, he knew that Crowe was in the audience (he had stopped by to say hello). A few minutes into the set, the bar manager appeared at our table, passing along a request from Hitchcock: that Crowe come up on stage and sing a number with him. Crowe declined the offer, so that was that. But then, about 20 minutes later, the manager was back, now insisting that Hitchcock wanted Crowe to come up on stage. Crowe lowered his eyes, in a way that I recognized all too well, and fixing the manager with that molten glare said, “I’m not … gonna do that, mate.” I’d never heard the word “mate” sound more threatening. For a moment you could see the steam coming out of Crowe’s ears. The manager got the message and skulked away. And me? I got to witness, first-hand, why Russell Crowe was a movie star.
— Owen Gleiberman