Art and Experience: Indo Cine Appreciation Foundation in association with Culture House of the Islamic republic of Iran, Mumbai are organising Iranian film festival at Alliance Française of Madras from 11 to 13 February.

Here is a quick look at the films that will be screened:

I am Taraneh, I am fifteen years old

Fifteen-year-old Taraneh, whose widowed father is in jail, refuses the unwanted attentions of carpet salesman Amir – until Amir’s mother talks Taraneh into accepting Amir’s marriage proposal. Within four months the couple realize that they are incompatible, they divorce and Amir emigrates back to Germany. When Taraneh discovers she is pregnant she decides against all advice and intense social pressure, to keep the baby.

The color of paradise

The movie is a fable of a child’s innocence and a complex look at faith and humanity. Visually magnificent and wrenchingly moving, the film tells the story of a boy whose inability to see the world only enhances his ability to feel its powerful forces.

The story of young friends who met on the Internet and a fun way to bet on a complex and daunting fall. The path to a new understanding of life and society for each of them.

An imaginative dreamer university named Garoos professor falls in love with a student who resembles her teacher in this manner. Their love story is endangered when a business competitor sets Garoos up for unethical behavior.

A story about human beings and their relations which has a man in the center of it. Because of a car accident he has Alzheimer and must face a different new world.

Sixteen-year-old Arash is reaching puberty. After years of living with his mother, he leaves her to live with his father. Once there, he visits a girl who changes his life.

Alliance Française of Madras is located at No 24, College Road, Nungambakkam, For details, contact – 2821 2652. 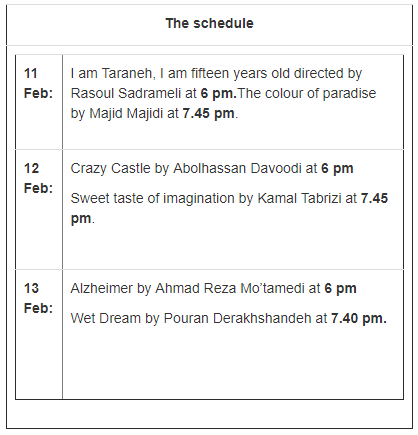